What started out as counter-culture basement bands in Seattle quickly became mainstream. 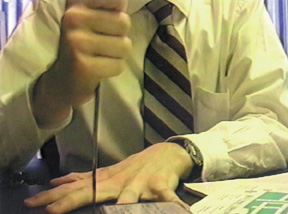 From 1993 to 1995, Chris Wilcha shot over 200 hours of Hi8 tape using a camera his parents had given him after graduating college. Chris took the camera with him to his office at Columbia House Music and shot continuously every day of his two-year stint there. Not ever intending to make a film at the time, it wasn’t until he attended film school five years later that he incorporated his Columbia House era footage into what is now The Target Shoots First, an extremely well edited feature film which documents the clash of corporate culture against creative labor.

The effectiveness of Chris’ documentary is in its universality. There isn’t a company in the country where these scenes and scenarios don’t take place daily just as they do on the screen. What we see is quick scene after scene (most only lasting about 10 to 20 seconds) of various corporate office happenings, from the mundane to the political. For instance, we progressively see Mr. Wilcha after long boring days seemingly loosing his sanity on camera. There are also very touchy personal meetings and assorted interoffice power struggles sprinkled throughout endowing Target with a discernable, albeit unique, narrative. The result is nothing short of a candid insider look at big consumer business and how humans manage (or fail) to interrelate.

Specifically to Mr. Wilcha’s documentary, the early 90s introduced a fairly new genre to the music industry: grunge. Quintessential names like Kurt Cobain and Eddy Vedder became iconoclasts in a very short time 1. What started out as counter-culture basement bands in Seattle quickly became mainstream, and Columbia House was not slow to recognize the newly emerging demographic.

The trick was obviously merging two very different worlds – the malcontent music scene with consumptive materialism. The bottom line was and always will be record sales, with or without a social revolution. In so doing, Columbia House’s “subversive act of infusing the spirit of punk rock into the corporation was ironic since that resulted in convincing kids that consuming was not only cool, but an act of rebellion.”

Within the ranks of the company, Wilcha found himself representing his generation. He soon worked with others his age in a small cell group, focusing on the production of the new “grunge catalog.” He and his coworkers in Creative Services on the 17th floor worked tightly together, while the upper brass in Executive Management on the 19th floor seemed separated by a lot more than two stories.

As with so many corporate environments, the two factions rarely saw eye to eye. Management doesn’t feel their creative ideas are taken at face value in the creative department who in turn feel management believes they are brainless, with Wilcha finding himself a liaison between the two. The official company line admits that the relationship between Management and Services is better described as a “client-agency” relationship, with Management as the faux agency. Needless to say, the legendary business architect and statistician Dr. W. Edwards Deming would have had a field day in case studying Columbia House.

At times Wilcha dissects the corporate job life with almost Dilbert-esque satire. Accordingly, the documentary is logically divided into sections such as:

“Office Babies.” Herein, Wilcha evinces the sometimes uneven treatment given employees who happen to be young mothers. With their maternity leave, company-funded day care, and tardiness leniency, it’s as if the childless single employee is penalized with a lack of welfare.

“Office Injuries.” Wilcha exposes some rather neurotic staff writers with their highly quirky habits and ailments. Like one fellow who developed tennis elbow, burning eyes, and bad posture.

“Office Parties.” What do catered cakes and mandatory sing-alongs to honor employees’ birthdays have in common? Wilcha reveals the age-old corporate plot of enforcing a simulated community among its workers in the hopes of improving efficiency. It doesn’t get any more Dilbert than this.

All in all, Wilcha’s debut film is a brilliant piece of documentary, both engaging and intriguing. Commenting on the prospects of traditional mail-order music clubs, Wilcha said after the screening of The Target Shoots First, “The future of clubs is teetering on oblivion with the advent of MP3s, Napster, and internet sales.”

Judging how well Columbia House accommodated the new age of youth rebellion — the grunge movement — I’m betting it will likewise reinvent itself for these new hurdles. Only time will tell how this particular corporate ladder adjusts.