In July’s AOTM, I related my move to the city of Plano, Texas. Fancying myself as something of a student of community and inter-relationships, I’ve taken it upon myself to try to connect with this new city of mine in a way that I never did in Garland, Texas. 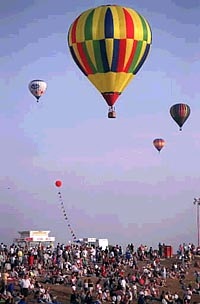 The balloon launch was spectacular. Not more than a few hundred feet away from the fields where the crowds sat in awe were about 25 gigantic, billowing balloons, filling with hot rising air. Slowly, these cloth giants inflated, dwarfing the baskets at their bases. Then, one by one, they began to lift off the ground without a sound. The men in the baskets rose steadily into the humid air, becoming smaller and smaller, hovering above the mob of people and their amazed glares. We could only imagine what that feeling was like, to be suspended in a wicker flying contraption, sustaining weightlessness with no more than hot gases above you.

And perhaps that is the attraction with hot air ballooning. The idea can be a welcome one, that of lifting off into a silent and tranquil horizon and leaving the world below. As a crowd, we were all cheering the balloon pilots’ departure.

Soon afterward, the aging folk-rock group America took the stage for a live concert. Comprised of three guitars, one of which a six-string, one bass, and drums, their music was a pure acoustic sound of grassroots Americana.

There were hexagenarians dancing to the music in the fields — not gracefully, mind you. Amongst a rather stoic middle-aged crowd, here were two people gloriously unashamed of their love for each other and their mutual celebration of the music around them. And yet as awkward as they appeared, their youthful enthusiasm was curiously infectious. Soon, teenagers joined them as did other older couples, several generations of dancers.

Children ran through the grass with glow sticks, while others threw plastic helicopters high into the air. There was a kinetic pulse of life in the crowd.

And then the fireworks began. Nearly as fun as watching the display was stealing glances at my fellow onlookers, intent with childlike gazes into the evening ignited sky. It has always amazed me how universally fireworks can captivate an audience. Adults become children again, and children become momentary peers with their parents. Finally the last aerial explosions dimmed to embers, signifying the close of the Balloon Festival.

A large stretch of road was blocked off strictly to handle the exiting crowds. The throng descended upon the vacant three lane highway; the night air was thick with impending storm. There we were, hundreds of us, wandering like zombied inhabitants of a nuclear holocaust. We walked all of us in the sweet silence of the evening. Our collective hush was the sound of satisfaction, of contentedness, without thought of the days before or the coming bustle of those ahead. We were all basking in the moment, alive with our loved ones and happy.

And we weren’t in balloons, dangling above the Earth. This elation was our own; we didn’t have to escape the planet to feel it. It was there, and we partook.