Is it just me, or are there a lot of sought-after siblings in Hollywood right now? Whether sharing the director’s chair, the producer’s hat, or the writer’s block, I suppose two heads are better than one. Here are some cases in point:

Joel and Ethan Coen epitomize the paradigm of the successful familial Hollywood partnership. Whereas most brotherly duos seem to share evenly the writing and directing jobs, for the most part Joel does the directing while Ethan the writing. This arrangement has worked well for the team. Consider their past landmarks, too many noteworthy to dissect: Blood Simple, Raising Arizona, Miller’s Crossing, The Hudsucker Proxy, Fargo, The Big Lebowski, O Brother, Where Art Thou?, and The Man Who Wasn’t There.

Notice anything peculiar in that lineup? Yes, the titles! The titles certainly betray the Coen boys’ enthusiasm for the slightly bizarre. For instance, in their latest, the “man who wasn’t there” is most definitely the vacuous lead character, a shell of a man for most of the story. Likewise, “O Brother, Where Art Thou?” was borrowed from Joel McCrea, which he wanted to call his adaptation of Preston Sturges’ classic Sullivan’s Travels. And again, the “proxy” of recently deceased Waring Hudsucker was one Norville Barnes, heir apparent to Hudsucker’s company.

Consider also the awards and nominations that accompany these films: a handful of Golden Globe and Academy Award best pictures, screenplays, cinematography’s, etc. You know, for kids!

So eclectic and wonderfully quirky are the Coen’s pooled style that they have single- (or rather dual-?) handedly provided us a vibrant cross section of Americana. From the late 20s in O Brother, to the early 30s in Hudsucker and Miller’s, to the 40s Man Who Wasn’t There, finally to the 90s in Fargo and Big Lebowski.

In barren blockbuster times such as these, I can only say, “Thank God for the Coens!” 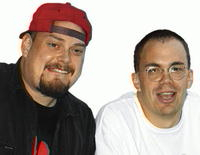 What can be said that hasn’t been about the siblings behind The Matrix? Well their partnership didn’t start there. Andy and Larry first found themselves on the Hollywood map with their 1995 co-written script for Assassins, the forgettable Richard Donner spy-vs.-spy piece. Still, it was a good springboard for their next co-production and first mutual seat in the director’s spotlight a year later: Bound, a mob heist noir with lesbian sensuality not seen since this year’s Mulholland Drive. Starring Gina Gershon, Jennifer Tilly, and Joe Pantoliano, the Wachowskis really established themselves as visual crafstmen.

And that brings us of course to The Matrix trilogy. The Matrix is a modern masterpiece of noir-meets-super hero proportions. A living breathing live-action comic book that single-handedly smote all males across the country aged 13 to 40.

Perhaps their only misstep was in making the first chapter too good. The Wachowskis set such a high standard, not only for the industry, but also for themselves that their two sequels couldn’t possibly live up to the hype. Though very solid chapters in the overall story arch, most critics and fans weren’t as satisfied.

Bobby and Peter Farrely are perhaps the darker sheep in this list. They do comedy, but not just “funny ha-ha.” More like “funny uh-oh” and “funny oh, that’s just sick!” Theirs is an assaulting, borderline mean-spirited punchline, the kind of laughs that are hard earned in a politically correct climate. They seem to take giddy joy in leveling their comedy crosshairs at everyone. No social group is spared — the disabled, the special needy, the elderly, the ugly, the beautiful, the dumb.

Yet, at least some of their movies make some of us snicker secretly. Guilty pleasures can be found somewhere in their films, though we hate to admit it. That rougher disparaging underbelly of our modern sensibilities is precisely the target audience of the Farelly’s. They’ve given it a voice in some raucous irreverence: Dumb and Dumber (their best), Kingpin, There’s Something About Mary, and Me Myself and Irene (their worst) to name a few.

Love ’em or hate ’em, they’re here to stay, bringing out the worst in us.

Albert and Allen Hughes have been pooling their movie-making talent since they began as well. There first big splash came in 1993 with Menace II Society, a gritty street tale of a hustler trying to trade the ghetto life for a better one. Then came the acclaimed Dead Presidents two years later, an uneven film of a band of Vietnam vets turned heist cons. The first act paled in comparison to Apocalypse Now orPlatoon, while the second left me thankful for the more seasoned Heist or The Score. Still, what the Hughes’ neglect in writing, they more than make up for in direction. They have a very distinct high visual style, akin to John Woo.

This fact is made more evident with their latest directorial project From Hell, the partly biographical account of Jack the Ripper. Not an original screenplay, this time the Hughes’ adapted the source material, an infamous graphic novel of the same name. Starring Johnny Depp, Heather Graham, and Ian Holm, the Hughes nailed this one. It’s a starkly gothic and beautiful tale. The underbelly and mainstream of turn-of-the-century London is perfectly realized, often times with life-sized sets or scaled cityscape mock-ups. The production is gorgeous. This time however, the grandiose story accompanies the scope of their shared direction, giving a more rounded completeness.

For their second film, Jonas and Josh Pate co-wrote and co-directed Deceiver and somehow managed to bring in quite a cast: Chris Penn, Ellen Burstyn, Tim Roth, Rene Zellweger, Michael Rooker, and Rosanna Arquette! It was a tightly drawn thriller that I’m afraid nobody saw.

Their latest and woefully underrated masterpiece was a short-lived television show, G Vs. E, a wonderfully black comedy with a supernatural twist. “Good versus Evil” was like Pulp Fiction meets The Exorcist. It all starts when reporter Chandler Smythe is killed by a gang member. He awakens in a police interrogation room and is offered the chance to join “The Corp,” a sort of afterlife police precinct, battling the Faustians (poor saps suckered into deathbed deals with the devil) and Morlocks (Faustians after their deals fall through). Chandler teams up with Henry MacNeil, a black man killed in the 70’s. Together they travel the streets of Hollywood, naturally a hub of demonic activity, fighting evil.

That the show was canceled prematurely by two cable networks is criminal. The channels nor the audience knew what it had in the Hughes’ genius latest until it was gone.

The Pang Brothers (Oxide Pang Chun and Danny Pang) are a pair of Chinese filmmakers that cowrote and directed The Eye, a psychological thriller. They’ve also directed Bangkok Dangerous together. 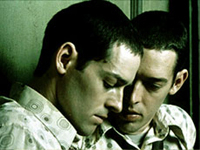 Then there was the Polish Brothers. Mark and Michael wrote and directed Northfork, that well-meaning fanciful, but ultimately plodding drama. They also did that strange little film about the Siamese twins, Twin Falls Idaho. Yeah, that one.

Eternal Sunshine of the Spotless Mind