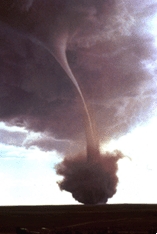 These phobias make sense really, when you consider their cultural background. There was a train nearby my grandmother where she grew up which was terribly loud and frightening to young children. The precarious train bridge which the children had to cross on the way to school didn’t help their anxiety. Mom lived close to farm animals and the bull was a looming threat, stamping its feet and snorting its taunts. Growing up next to tornado alley, the twisters were a constant threat to my livelihood.

And yet, I’ve always had a morbid fascination with them. I loved the movie Twister, even though it was just a corny popcorn flick.

In most of my dreams about tornadoes, I try desperately to snap a picture of the elusive beast. If I couldn’t slay it then at least I could document that I was its victim. Although I was successful in my dreams, I was never as successful in waking life. All those years and I never actually saw a tornado up close.

Well, now I’ve finally been to the heart of darkness, the eye of the storm. Vicariously, mind you, but I’ve touched the void and made it to the other side unscathed. National Geographic is running a stunning bit of video of some storm chasers and their high-tech tornado cam. Thrilling stuff to those that appreciate the power of nature. I never thought I’d see a tornado this close and not be killed for the privilege:

Days of Melancholy Way Back When