A few weekends ago, I drove up into the mountains of Colorado. Was I going camping, you ask?

No, I drove up into gorgeous Breckenridge, Colorado — an impossibly beautiful ski lodge city, tucked away in the mountains — to watch movies.

I discovered the Breckenridge Film Festival by accident really, thumbing through the local free arts newspaper (appropriately titled with pun Westword). What luck, especially since I had just missed out on this year’s Telluride Film Festival over Labor Day weekend. Telluride turns out to be over 8 hours from Denver, whereas Breckenridge a mere 2. Telluride’s film package starts at about $700! Breckinridge? $34 bucks for 4 flicks.

I began liking this baby brother festival more each minute! So, on with the show:

First up was a 23-minute short comedy called Artistic License. The film was a brilliantly funny movie. I was simply amazed at how professionally it was shot, tightly told, and well acted.

The story: David Milken really loves his job, taking photo ID pictures at the Department of Motor Vehicles. No you don’t understand. I mean, he really loves his job, somehow finding a way to infuse artistry in every shot. With his collection of backdrops and props, he manages to bring out the beauty in every face. His friend Don boasts, “You’re a civil servant and an artist. How much more profound can you be?”

But his boss, Brianca (secretly dubbed the “Bre-otch” by the staff), is a Dilbertian evil dictator. She’s at odds with David’s artisan flare, and doesn’t see the value in his craftsmanship.

There’s a stroke of genius in a dream sequence to the tune of Pink Floyd’s Brick in the Wall that had me rolling. From beginning to end, the film was a sheer joy to watch. Artistic License is picture perfect. Go watch the trailer and you will agree with me.

Next up was the 12-minute short film Reflejos, Spanish for “reflections”. This was an amazing little film, a true study in economy of direction and story. I was amazed at how much was told without a single word of dialog, only one actor, and in a single scene, single take.

For those that would not want the entire film divulged, skip to the next film. Otherwise, I’m going to get into the details now.

There is a man who enters what appears to be a bathroom. He is groggy with sleep and leans forward to the camera, as if gazing into the mirror. Thus, the audience has a fly-on-the-wall view of this guy, looking through the mirror.

The man is preparing for, what we assume to be, his workday. He puts his pants and shirt on, he brushes his teeth. During this, he looks down at the shelf below the “mirror” at what appears to be a photo of someone he loves. We naturally assume it’s his mother.

He leaves the bathroom and comes back with a nylon hair net on and a wife beater t-shirt. He forlornly glances down at the picture again and slowly pulls the hair net over his face. We begin to realize that he is most likely some sort of gang member. He begins to cry for what apparently he’s about to go do. He wipes away his tears and leaves the room.

He comes back with more supplies, his tears dried. He leans into the mirror and begins applying makeup. Foundation on his cheeks, lipstick on his lips, and eyeliner around his eyes. He looks down again, slowly shakes his head. We now begin to fear that he is actually a male prostitute.

He leaves the bathroom once more and comes back with a wig. He puts the wig on over the hair net and it’s a long bright red mop. At this point, it looks like he’s a transvestite. But he continues with the costume — red round nose, painted tears on his cheek, and baggy overalls. He is a clown. A sad clown.

What was amazing about Reflejos was its Warholian manipulation of our senses in three tiny acts. The film steered us in varying directions based solely on our perception of the character. What appears to our eyes is not what may really be truth. Fascinating little film.

Next up was a wildly different short film called Meage a Trois. It’s a very light 15-minute comedy in the vein of Legally Blonde, complete with a hyperactive, talkative lead character named Lindsay. Her boyfriend Brandon is trying all day to propose marriage to Lindsay, but one phone call after another to her foils his attempts.

Apparently, the film’s script is modeled very closely to the 1950’s opera “The Telephone.” The opera was a critique of then-modern technology (very non-mobile telephones) encroaching on face-to-face conversations and, hence relationships.

All valid points, but I’m not sure the moral is translated so well for our present time. It’s all very cute and chipper, but ultimately the age of mobile phones are a foregone conclusion. Much as I hate them right along with first-time writer/director Kimberly Wetherell, her criticism comes across muted. If only it had the same impact as the lush pink tones in the wardrobe and set designs. 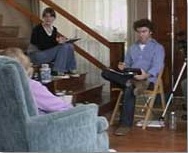 The next short film was the hour-long Taking Your Life. This was an extremely fascinating morality play, hinging on the question: is it wrong to take one’s life? The film doesn’t pander to one side or the other of the question. There are no contrived circumstances for the suicide in question.

The film’s hypothetical involves a documentary filmmaker who is approached by a woman who wants him to make a film of her life. The clincher of this film-within-a-film is that the woman plans to kill herself before the end of the film’s shooting.

The moral dilemma of the filmmakers, who know full well her intentions, is obvious. How detached and objective can they possibly be from this “story” and still retain a sense of dignity? And yet from the other perspective, as documentarians they can’t easily interfere with the woman’s plan without injecting themselves into the story, thus disturbing the “truth” of their subject matter.

Underlying this setup is the film’s subtle commentary on the media in general. How much does our society’s perverse infatuation with “reality television,” for instance, really have to do with reality? The studios that put these shows on the air are in fact manipulating the outcomes by simply participating and editing the action. Delicate stuff portraying reality, especially when the stakes are so high. One’s own demise is certainly the highest.

This suspicion of the media is no accident. Taking Your Life is the brainchild of Eric Beetner, the real life senior editor of Fox’s Fear Factor. He knows firsthand just how much fabrication is involved when a film crew peers into someone’s life. Eric expressed an ambivalence to decrying the ails of his day job, as it certainly helped fund his indie short film (shot in 9 days for less than $10,000).

Though the subject matter is difficult to acknowledge, the central question and how it was resolved in Taking Your Life made for an extremely fascinating film.

The next two films were the feature presentations (usually full length, larger budget premieres). The first of the two was Lord of War. Nicholas Cage stars as a scheming arms dealer in the 80s, who manages to hide his business from his model wife (Bridget Moynahan).

Much of the weaponry — and there is plenty of it — is traded to African warlords. Lord of War is an odd little movie. On one hand it tries to be very globally conscious (like The Constant Gardener did so much better); on the other, it strives for a zany veneer (like Cage and Kaufman did more affectionately in Adaptation). Unlike Cage’s villain in Matchstick Men, his gun-running Yuri Orlov is no thief with a heart of gold. The guy’s despicable, though Lord of War wants us to either pity him or despise him. I’m not really sure which. One redeeming scene came with a Jeff Buckley song in the soundtrack, “Hallelujah”.

Finally was Thumbsucker, a trippy teen coming-of-age film that was a nice change of pace. It’s got quite a cast of subtler actors: Tilda Swinton, Vince Vaughn (yes, he’s subtle here!), Keanu Reeves (is he ever more than subtle?), Vincent D’Onofrio, and the young Lou Taylor Pucci.

It’s a very odd little gem of a tale about a high schooler, Justin Cobb, who has never quite let go of the infantile habit of sucking his thumb. His life is over-stressed, like so many kids, and he takes it out on his thumb. His bizarre orthodontist recommends hypnotherapy… administered by the orthodontist! This proves to be partially successful, but Justin finds more immediate results from prescribed behavior-modifying psychotropic drugs.

The film plays like a few others in a quickly crowding array of eccentric indie movies that make it mainstream. Off the top of my head: Everything Is Illuminated, Rushmore, Eternal Sunshine of the Spotless Mind, Adaptation, or Punch-Drunk Love.

The good news is that if you liked any of those, chances are good you’ll still find room in your tastes for Thumbsucker. Nice little flick with some Big Question questions to ponder.

For a whirlwind day of moviegoing, the Breckenridge Film Festival was a blast. I think next year, I’ll try to take my time though.

In God We Trust