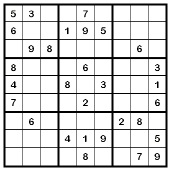 Sudoku is a neat little logic game that sort of reminds me of those heredity quizzes. If crossword puzzles had a math-like equivalent, this would be it.

It’s all deduction by careful logic. You’re given a 9×9 grid which is split into little 3×3 grids. The numbers 1 through 9 must be filled into each row and column and 3×3 grids, but no overlap is allowed. In other words, a single number can only be used once in each row, column, and 3×3. Sounds easy, right?

It takes quite a while at first. But I was hooked.

I found this little jewel in last week’s Denver Post. Apparently, they’re quite a new puzzle craze. With a Japanese name, their roots are actually in New York.

Look for it in your local paper!