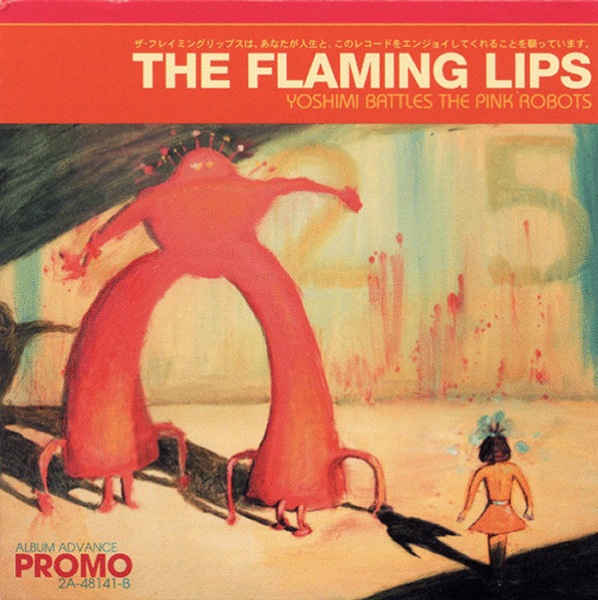 Saying this is “just” a pop song is like saying a classic Roman arch is a pile of stone with a slit up the middle.
— Pitchfork Media review

As the webzine Pitchfork 1 analogizes, if flying saucers had pop music, The Flaming Lips would be what they’d listen to.

The music of Flaming Lips 2 has been described as trippy and psychedelic. Whatever you call them, they are a great band. Quirky, eccentric, bizarre, all true. And undoubtedly adept at consistently putting a smile on my face when I listen to their music. They have a simplicity in their tunes, yet a warm, childlike sincerity. By far their best album was Yoshimi Battles the Pink Robots. Even that title makes me laugh.

After much listening, I’ve come to realize that this album is one continuous thought, like a grand opera centering on the theme of intergalactic evil robots sent to destroy the human race. And the destined savior of our planet is the heroine named Yoshimi.

The following song from the album, “Fight Test” 3, amazes me. It’s a beautiful little ditty that has particular resonance to men. Especially men with wild hearts.

Oh, to fight is to defend
If it’s not now then tell me when would be the time
That you would stand up and be a man
For to lose I could accept
But to surrender I just wept
And regretted this moment, oh that I, I was the fool

‘Cause I’m a man, not a boy
And there are things you can’t avoid
You have to face them when you’re not prepared to face them
If I could I would, but you’re with him it’d do no good
I should have fought him but instead I let him, I let him take you

So much of this song is relevant to a generation of feminized men. The notions are all there: manhood and bravery, fighting for a beauty and defending her honor, fearing a bigger adversary.

“Fight Test” is majestically architected. It speaks so purely about an idea — steeling yourself up for something you don’t want to face — that it can resonate with anyone.

The song begins with a voice on a megaphone: “The test begins… now!” Absolutely. The test of manhood begins today. The decisions, and the crossroads that breed them, lay before us at this moment.

I especially love the chorus for its poetic imagery. It reminds me of the Four Mysteries of the 30th Proverb:

Notice in the chorus that the Lips are comparing the great mysteries of the cosmos (starlight and sunbeams) to a man’s internal moral compass (how he decides what’s right for his life). This is very significant. That barometer for right and wrong, defending your beliefs, and fighting for justice — those are grand mysteries indeed. Especially when so few men rise to that eternal challenge. It’s absolutely mysterious how so few are able to pull that off.

The song ends with that same megaphone voice: “The test is now… over.” One day our test will be over. Our lives were the test, an ongoing process to mold us into the men were were intended to be.

5 Replies to “Flaming Lips and the Search for Manhood”