Never fond of the “slippery slope” argument for preventative forewarnings, I’m forced to acknowledge its relevance. In this case, my cat of all creatures is proving the belabored point of age-old conservatism. Well, I take that back. Ebenezer has melded together, to great effect, the notions of the slippery slope and a “false sense of security.” Combined, they spell disaster.

It all started on the infamous night before Sarah and me were to fly to Texas, the hour the Feline Grim Reaper(s) came to visit my household. I must have forgotten to smear the sheep’s blood on my doorway; the messengers of death in question were none other than two small coyotes. 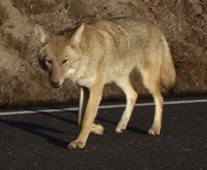 There I was, working in the garage quite late on yet another project. My back was facing the open garage door. I let Ebb out into the garage to play with me. He prefers sitting at the foot of the garage, peering out into the suburban wilderness.

The fool that I am, Ebb wandered out into the vicious jungle, the call of the wild too great while his domesticity too crippling. In short, he was utterly unprepared and outnumbered by two predatory coyotes.

In a flash I bolted toward the courtyard and saw the most horrifying site I’ve ever seen. My cat, my cute little snuggly innocent cat, caught between two lean killing machines. He was terrified, I could tell by his immobilized stance. Plus one of the blood suckers had him by the throat. The second had him pinned from behind, clutching Ebb’s tail.

This all happened within the span of maybe 5-10 seconds. Without thinking, I ran straight toward them, clapping loudly and shouting. They scurried immediately. Amazingly, Ebb remained there, frozen and hissing at me. I managed to carry him inside to inspect his wounds.

Even more incredibly, he was not gushing blood anywhere. I tossed him into the pet carrier and dashed off to the pet ER. The time was 12am.

Would you believe that all of Ebb’s wounds were superficial? Neither did I. Turns out that Ebb survived with only two bad scrapes on the back of his throat and a small cut on his tail.

He also had a couple puncture holes on his stomach and side, neither of which penetrated the lower dermis.

What stroke of luck? I thanked his legion of kitty guardian angels profusely. We put Ebb on fluids, antibiotics, pain killer, and lots of snuggling.

And yet only two weeks later, Ebb and I were again in the garage (together this time, with my undivided attention), peering outside into that vast violent great outdoors. And amazingly, he remembered not his run-in with death.

I know what you’re thinking. The danger of giving him a taste of life outside of a cramped apartment will leave him wanting more. And you’re right. Naturally, he assumes that he’s as safe outside as he is inside. Together, those two temptations nearly did him in.