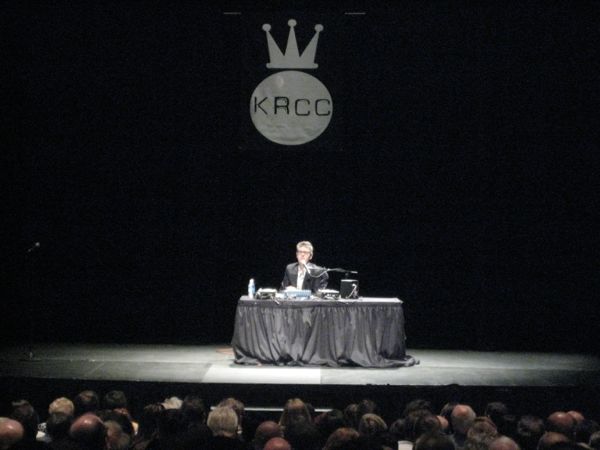 Sarah and I have become This American Life groupies lately. If you haven’t heard the radio show, it’s about time you do. It’s like a documentary of sorts: a group of disparate ideas centered around a central theme, but also it occasionally includes short stories and monologues.

About a month ago, there was a live telecast event of TAL 1 in theaters around the country. We went to that. Then this past weekend, show host Ira Glass came to Colorado College in Colorado Springs to give a lecture. We went to that too. 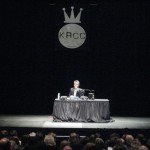 It was a fascinating evening. Besides the excitement of seeing one of your favorite personalities in person, Glass gave an interesting talk on the nature of narrative power, especially in contrast to more pervasive mediums as TV and film.

He began the talk in near dark. We could not see his face except in silhouette. His point being that the voice alone can be very intimate and persuasive. Of course, the voice alone only has so much power. There is a certain craftsmanship required to elevate the spoken word to more powerful heights.

Glass went on to share the technique he’s perfected over the years. Surprisingly, he found that it held uncanny similarities with — of all things — the art of preaching. He was told by monks, televangelists, and Evangelical pastors alike that his narrative style (starting big, using humor, intercutting with good music, make your audience think, formulate the narration around a central theme) resembled closely what they did for a living.

This style is what Aristotle called the “proairetic code” 2, Glass said:

And he’s not kidding. Glass dissected the technique while playing some clips from past shows. The effect is very addicting.

13 Replies to “the Proairetic Code”