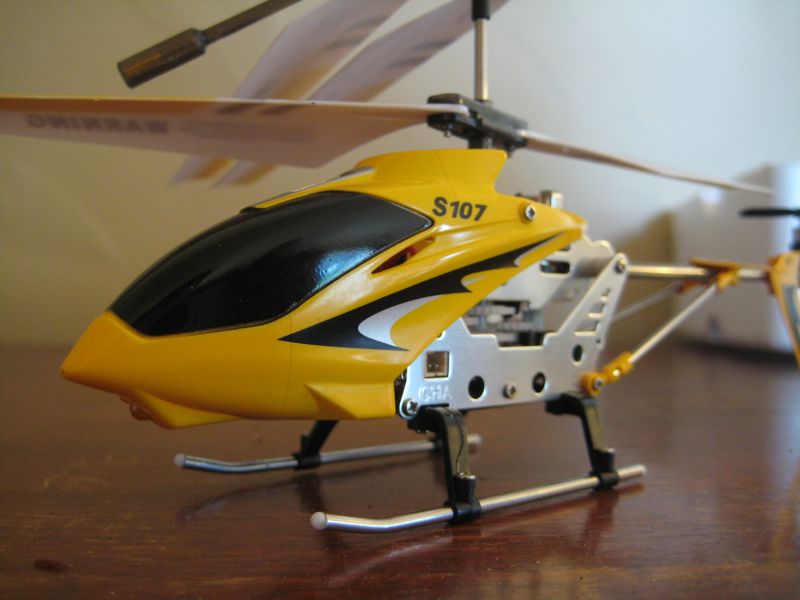 I was recently contacted by Jeff Chan over at Xenon Project, an RC 1 hobbyist retailer. At first, I figured the email was bogus, as I get quite a few of them on a regular basis. So I was quite thrilled to discover that Jeff is indeed the real thing, and his company far from bogus.

Neither are Xenon’s RC vehicles! They sent me a yellow S107G Mini Gyro helicopter to evaluate. Not being an RC guy myself (I’m more of a DIY electronics buff personally), I wasn’t sure what to expect when Jeff first contacted me. When I received the copter, I was very pleasantly surprised. These aren’t cheaply made toys with batteries. They’re pretty sophisticated and expertly designed models. Speaking as an electrical engineer with 10+ years of embedded design experience, I could see the care and attention to detail. 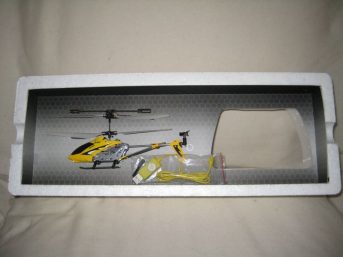 And yet, amazingly, the cost of this copter is only $25 from Xenon! It’s a Chinese 2 imported toy, but that shouldn’t deter you. Chinese design has really improved over the past 5 years. No longer is China content to export their manufacturing workforce only; they are aggressively pursuing inroads into the engineering design market as well.

The S107G Mini Gyro is really well designed. It’s an intricate model, built with a mostly aluminum chassis, and plastic outer shell. There are machined screws holding the frame together, not the cheaper plastic welding or rivoting.

The electronics inside the helicopter were equally impressive. There are three micro-sized motors — two appear to drive the dual overhead propellers, while the third drives the rear prop.  It’s quite an amazing little design, really. There is a large “balance” bar on top of the two props which can be tilted forward or backward by an actuating mechanism in the shaft of the propellors.  This acts as a counterweight system while the props are spinning, which gives the copter forward and backward propulsion.  I suspect that one of the twin prop motors is actuating this balance bar.

A “USB” charging cable is included, but this appears to be a bit of a gimmick. There’s nothing inherently USB about this helicopter; i.e., you can’t communicate with the helicopter from a host PC, nor would you need to. The cable is merely another convenient method of charging with a 500mA, +5VDC power source (i.e., your computer’s USB port).

The construction of the remote was by far the least impressive, as it probably should be. You really only need the remote to be functional and utilitarian. It’s the standard fare: traditional gamepad design, weighted nicely by the 6 AA batteries located toward the rear underside. There are so many cells because the remote can serve as a power supply to charge the helicopter, in addition to the USB cable method. The remote has an integrated charging cable that is stowed inside when not charging.

As for the performance of the S107G Mini Gyro, I was pretty impressed. It’s surprisingly stable in flight, once you get the hang of it. There is quite a bit of variable control in both the yaw and pitch of the copter, as well as the acceleration. It’s a bit of a learning curve, but well worth the effort.  Because of this copter’s small size, any amount of breeze will throw off its flight pattern.  So unfortunately, it’s tough to control outdoors with any amount of wind.

Also, I noticed in my trials that the battery power in the copter tends to wear down very quickly.  In about only 10 minutes of flight, there wasn’t enough juice left to get more than a few inches off the ground.  But the battery circuit does a pretty good rapid-charging job, and you’ll be back in the air in 10-15 minutes.

Despite any of the shortcomings, you just cannot beat that price.  $25 for this amount of micro-electronics design and capability in an RC toy is quite amazing!  I would recommend the S107G Mini Gyro helicopter to children and adults alike.