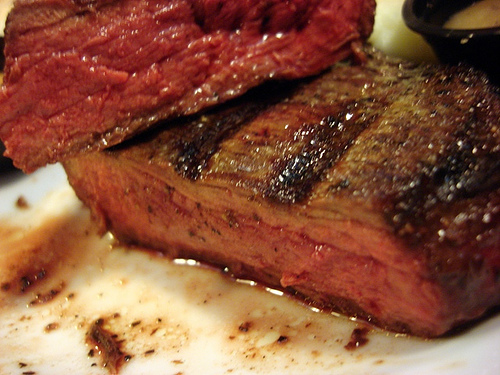 I’m not much for resolutions, but took the plunge this year and resolved something for the new year.  I vowed not to eat meat.

Partly out of solidarity to my wife and kid, partly out of convenience (family meals get a whole lot simpler when we all eat more alike), and partly out of new found conviction, it’s a choice that has taken less time to get used to than I would have thought.  It’s been a month so far, and I haven’t been jonesing.

I should start by saying that this isn’t really a sudden thing. My wife became a vegetarian 1 in early 2007. As such, meat hasn’t been prepared in our house for some time — with the rare (ba-dum-dum) occasion of pizza sausage or hot dogs for me.

And I have to say that I honestly never felt pressured into this lifestyle choice.  Sarah never insisted I adopt hers and Iris’ diet.  I ate meaty pizza as they ate cheese and veggie pizza.  When we went out to eat, I would have a burger while they had their portobello mushroom burgers and cheese enchiladas.

After a while, I even started weening off my meat consumption for work lunches.  Instead of deli sandwich slices, I opted for Tofurkey.  Sure, it’s not a perfect substitute, but it’s not bad.  And don’t get me started about Morning Star brand breakfast meat substitutes.  Wow, I’m amazed at how flavorful they are!

So really, it wasn’t a big leap for me to simply cut out the few remaining meat sources that I craved: juicy all-American hamburgers and hot dogs.

People identify as vegetarians for different reasons.  Some take a moral stance, arguing that animal life is worthy of our preservation.  Others take a dietary reason, believing (rightfully so) that a red-meat diet is not worth the risk to one’s heart health, and that protein can very easily be replaced by other rich foods.

I see the reasons on a spectrum: perhaps on one side is the moral, the other side being the dietary.  I think I lean more toward the moral side, seeing industrialized factory farming as a very real indictment of our character in how it impacts animal life.  But the dietary rewards are very real.

My meatless 2012 is one more reason why I am a better me with Sarah.

One Reply to “Vegetarian resolutions”