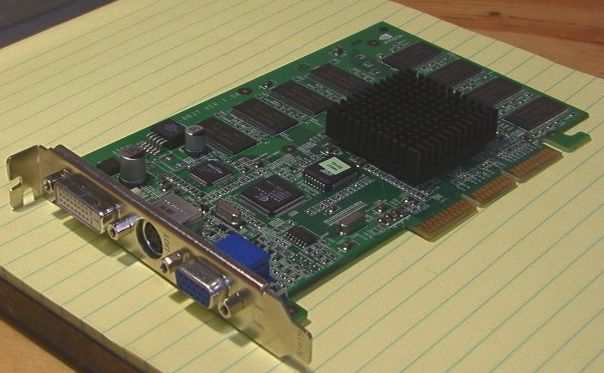 I’ve been quite impressed with it. It’s got three output types: VGA, DVI, and S-VHS (the last two as seen below). 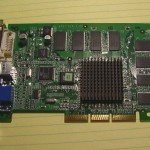 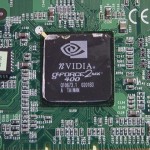 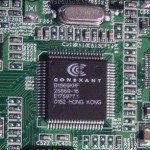 And here is the Silicon Image DVI chip 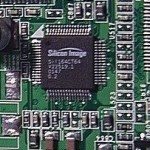 However, I noticed that the GPU gets quite hot, as it only has a factory heatsink and no fan. So, I looked into getting an aftermarket fan/heatsink combo. I’d heard good things about Thermaltake and bought one of their Crystal Orbs. 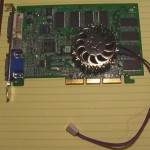 I had a lot of trouble with installing it though. The Orb is really meant for the higher end cards that come with fans, and thus have mounting holes on the PCBs to accommodate such mounting hardware. On my measly GF2, there are no such mounting holes. However, Thermaltake does provide a thermally conductive adhesive strip with the Orb for just such an application.

I found this adhesive to be quite disappointing. For me, after no less than a day the fan had fallen off the card. Keep in mind that this card is AGP, so that it hangs upside down in an upright mini tower case. Therefore, all the weight of the fan is stressing the adhesive strip, which just didn’t provide enough bond. 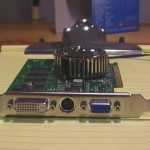 So, I tried to scrape the adhesive off the GPU which proved to be a mess. The stuff is like a gummy security sticker — it disintegrates into a pasty goo when you attempt to tamper with it. I finally gave up and left it on. I then added a thin layer of thermal grease to the gooey surface. Then, very near the edge of the GPU I added a small bead of E-6000 industrial glue. It’s got the strength of a 2-part epoxy without the fuss of two parts!

That proved to be the solution. The fan hasn’t budged since.