I was struck by the power of the following image in Batman Begins:

What you see there is the young Bruce Wayne, walking out into the frozen tundra of the Himalayas (or some other remote part of the world). Bruce, a disillusioned heir to the Wayne empire, has reached his emotional limit and has set out on a journey. His search is not for material treasures or personal accomplishments. He’s in search of himself. He is embarking on a mission, a test, to find out if he has what it takes to be the son of Thomas Wayne. You’ll notice also the barren land that he is entering. That location is not by chance either. A hero’s journey is a solitary one into uncharted territory.

In his book Wild at Heart, John Eldredge makes the case that the above image is one of many cultural icons for the male rite of passage. Batman Begins depicts a perfect archetype of the quest into manhood. At some point, a boy must test himself. Ideally, this testing is done along side a father. But in Bruce’s case — as in many of ours — his father’s death (if not physical, then emotional or relational) left him a lonely path.

After Bruce sees his parents gunned down, his father’s last words to him, eyes locked intently on his boy, were:

But Bruce was afraid. Fear ruled him and he blamed his dad for not saving himself. And hence Bruce’s troubled journey began.

That these indelible images are burned into our collective consciousness, and their universal themes resonate in our own lives, should not surprise us. They are present in many other stories, tales, and legends. They have become a part of our mythology in that they reflect a core truth.

Look at Indiana Jones and the Last Crusade:

To save his dying father, Indy must embark on a path into the heart of darkness deep inside the lost chamber of the Knights Templar. The path is strewn with dangerous traps, the final of which is a veritable leap of faith: a chasm 20 feet across. The inscription in his father’s Holy Grail manuscript reads:

He will leap from the lion’s head and he will prove his worth.

…to which Indy declares: “Impossible! Nobody can jump this.” And yet, Indy proves his worth to his father by believing, truly believing, that the Grail legend was true.

Again, in The Lord of the Rings: The Return of the King, Aragorn, the lost heir of the Gondorian throne, must prove his steel in a cave of spirits. 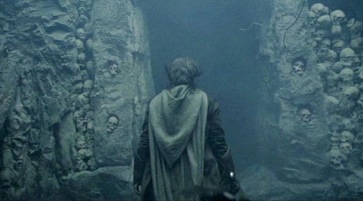 The descent into the Dimholt Mountain is certain death, as no one has ever lived to tell about its inner caverns. Yet Aragorn rises to the occasion.

Finally, there is Jesus Christ in his wilderness trial. The temptations He encountered there tested his messiahship. 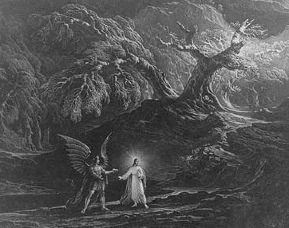 I have this fantasy of embarking on a lonely trek like Bruce Wayne’s. Though I have no aspirations of becoming a caped crime-fighting super hero, I deeply want to take such an inward quest. If not literally, then figuratively I want to discover who it is I am meant to be. And if I am to be this person, will I have what it takes to fully become that man?

the wilderness between fathers & sons