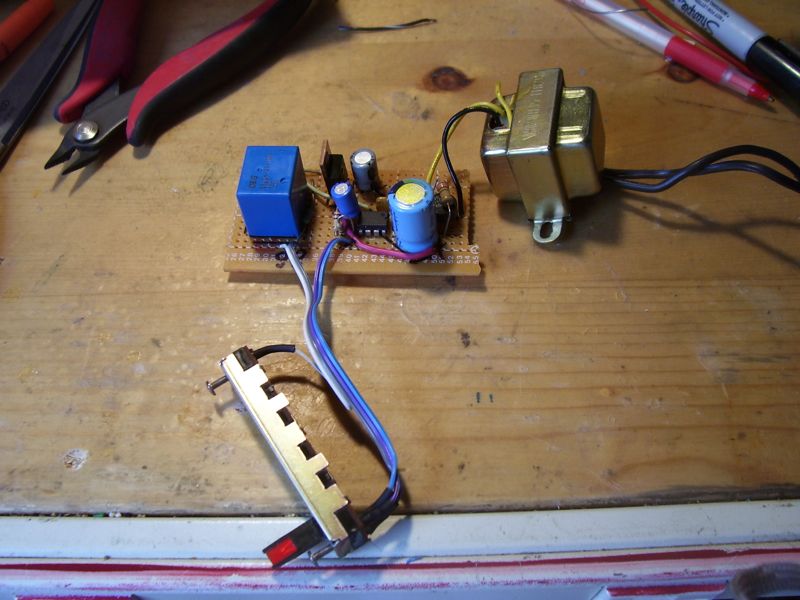 Time to get caught up on some old projects. Here’s the first of many…

I’ve got a Sony amplifier/receiver for our home entertainment altar system. I also have a set of surround sound speakers, not the best in the world, mind you. That being the case, the subwoofer has this annoying defect of turning on automatically when it detects audio on its input wire.

This is supposed to be a Feature®, in that when your amplifier turns on, so does the amp. But the thing is, my amplifier takes a considerable amount of time to “turn on” its output relays. Like up to 10 seconds! And what’s it doing in all that time after you hit the power button? Well, it’s some sort of Calls D amp (I suspect) with lots of analog and digital circuits (Dolby AC-3 and Prologic decoders, etc.) It just takes that long for its many audio processors to boot up and for the analog output relays to click on.

While all that is happening, unfortunately the subwoofer audio out is sitting at a pretty high gain. Pure buzz, basically. Loud buzz, in fact, as heard through the sub. Very annoying!

Now this amp has a switched AC outlet in the back, which could be used to turn on the subwoofer, except that the outlet comes on immediately when the amp is first turned on. So we’re still dealing with that interminably long 10 seconds of loud buzz.

Sounds like a job for a homemade circuit, doesn’t it?!

That switched AC outlet on the back of the amp seemed like a good place to start. So the goal of this circuit was to sense that AC turning on, wait 10 seconds and turn another AC line on which would turn on the amp. Simple enough. The good old 555 timer could handle this kind of function nicely. Here’s the circuit I found on the internet (sorry, can’t remember where I found it):

This circuit triggers the timer when turned on but keeps the output relay off until the timer count is triggered again. The edits to the scan are my changes. I’ve added an AC-DC transformer, rectifier, regulator stage. Also added a fuse for current-surge protection. The RC selection gives me a roughly 12 second timer. With the addition of a slider style potentiometer, I can change this time delay.

Now it’s time to build up the circuit on a breadboard, always the best first step of a proof-of-concept: 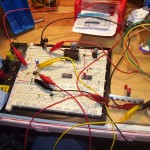 So now that all of that spaghetti mess actually worked, it was time to test an AC load. Here’s the same circuit with the AC outlet, about to be tested with my subwoofer: 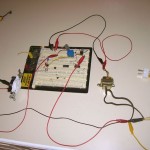 Once tested, it’s time to solder it all together on a small protoboard. Of course, determining the size of the board took a lot of fit-checking in the AC outlet box (see below). Here’s the finished soldered circuit with all the cables and parts: 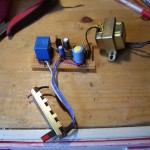 Packaging home circuit projects — for me — is always the hardest step. I’m not content just to throw the finished circuit into a big ugly box and call it a day. If possible and feasible, I prefer to have the circuit look at least somewhat esthetically pleasing.

So I was determined to squeeze this circuit into one of those plastic AC outlet cut-in boxes. This type of enclosure was perfect, since it would simultaneously house the AC outlet and the circuit, as well as accommodate an attractive wall plate. I chose the deepest plastic box I could find at Home Depot, knowing I had a lot of electronics to cram in there.

So here’s the circuit now inside the box. As you can see, it’s a tight fit: 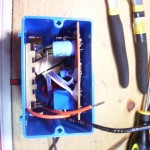 Before battening down the hatches, I had to cut a slot in the case for the slider pot. I used a Dremmel 1 for this: 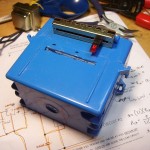 Here’s the slider pot inside the AC outlet box. This slider pot has a cute feature: it’s got a spot for a flat LED which lights up when the whole circuit is powered. I pulled it out of an old stereo. You can see the LED installed in the pot: 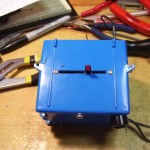 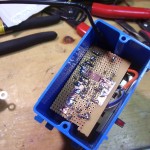 And the final product, packaged in an AC wall box with cover plate: 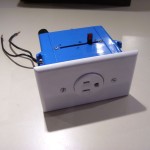 Overall, the circuit works very well. When we turn the amp on, about 9-10 seconds later its output relays turn on. A second later, this delayed AC outlet circuit turns on and the subwoofer turns on. No annoying buzz! Occasionally, there are mis-triggers when the amp is turned on and the circuit fails. Its output relay turns on immediatley when this happens and the annoying hum is back. I think the 555 input probably needs more transient conditioning, which somewhat surprises me since I have a regulated 12V output powering it. Oh well, things to fix… 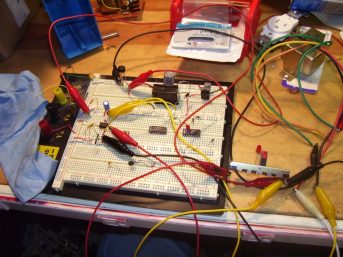 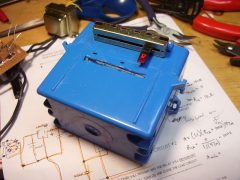 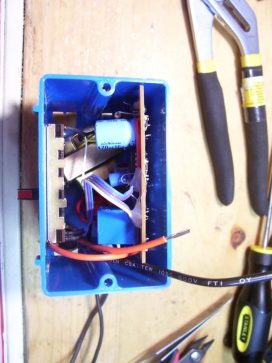 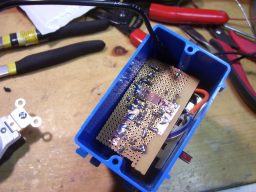 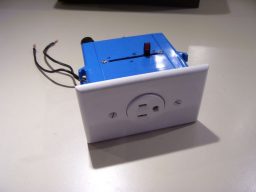