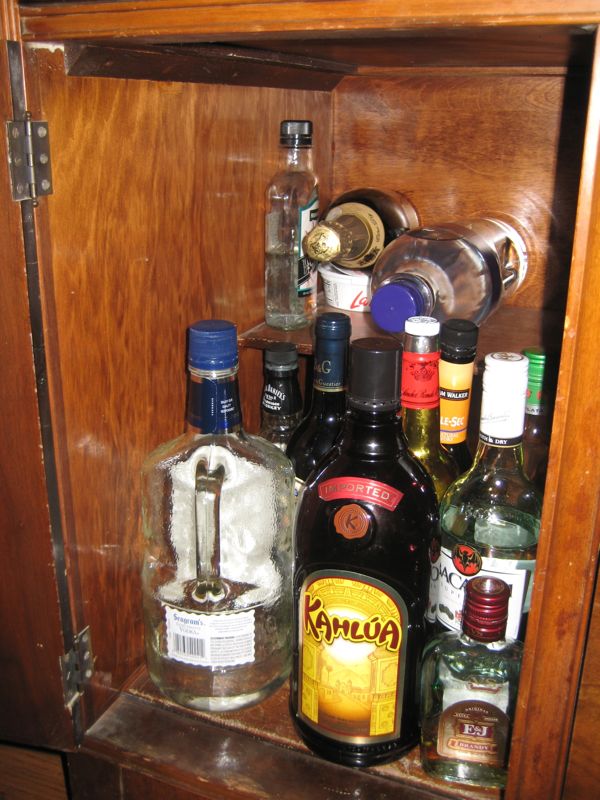 My 1-year old is a curious kid.  She prides herself in breaking into highly secure bank vaults, er cabinets.  In particular, she’s taken a liking to our buffet which houses both china and liquor (neither of which are kid-approved items) behind two toddler-level doors.  So I had to come up with a way to keep her out.

The industry standard method of course is to use the plastic cabinet door locks.  These are perfectly viable solutions, ones I’ve used many times already, as seen here on some of my kitchen cabinet doors: 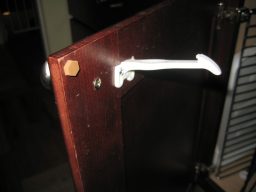 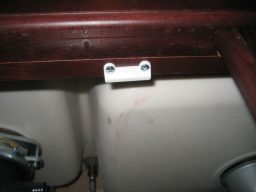 However, this buffet is something of an heirloom.  It’s a beautiful antique, made of pure {insert nice wood type here 1}, and one I wasn’t eager to begin drilling holes into. Enter the engineer’s dilemma: “There must be a better way.”

Well, there is. I examined the inside of the door compartment and found that there was a nice flashing lip where the door latches shut. This latch is a spring loaded ball bearing, which provides a nice “clicking” friction latch. The lip in question was just big enough that it could conceivably be used as a jamb, behind which an aluminum locking arm could hold onto to help lock the door.

The two doors have little threaded metal knobs already. So it wasn’t a terrible stretch of the imagination to consider a new handle assembly, consisting of the knob, some nuts, a longer 3/32 threaded bolt, and an aluminum lock arm. The theory of operation was thus: the user would twist the door knob to remove the locking arm from behind the door jamb; the knob travel would be just tight enough that the assembly wouldn’t freely rotate and come unlocked.

I used double nuts in the front and rear side of the door so that the knob wouldn’t come unscrewed as the user locked and unlocked the door. I also used locktite to tighten the threads for good measure. Coming from an electrical guy, I was quite pleased with the results! See below. 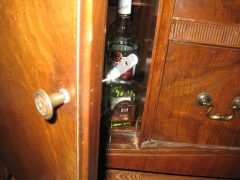 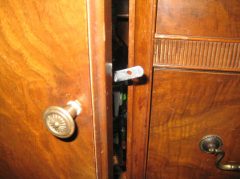 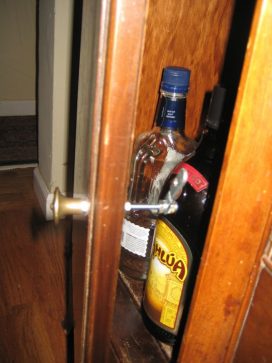 the Man & the Imposter

One Reply to “Cabinet child lock”