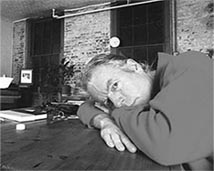 I was about to turn 20 years old. It was 1994 and my grandparents would be celebrating their golden wedding anniversary on my birthday. Flying to Orange, California, to visit them for a week would be a momentous occasion. Afterall, I was leaving my teens and they were entering their retirement.

One thing to realize is that my grandparent’s community was a decidedly geriatric neighborhood. Thus, finding things to do would prove to be quite an undertaking. Big events like going to Disneyland or Universal Studios were separated by days of sheer sweltering boredom.

So in those uneventful days where us kids had to fend for our own amusement, I retreated to my Grandpa’s garage. His collection of old tools was hands-down the coolest I’d ever seen — not so much for its size, but antiquity. He had a set of chisels and hand saws that looked as if they belonged in a museum. How he’d been able to do without the modern convenience of power tools was beyond me. Now of course I know: he was a true craftsman.

It was in his garage that I found his old transistor radio. This prize find held my attention like nothing else. I was certainly a product of my generation, bred on video games and television. But this little radio harkened back to a day when entertainment was somehow more pure and agrarian, like my Grandpa.

What the radio was tuned to happened to be National Public Radio. I didn’t know that at the time. At the time, all I remember was the sheer amazement of what was coming over the airwaves. It was a single speaker, a man in his 40s or so speaking to a live audience. His topic seemed to be wide-ranging, frenetic and forceful. The man was talking about a war of some sort, his lurid and chaotic experiences in a foreign Asian land. I was so mesmerized by his brazen energy, so impressed by this radio station’s audacity to air such a program, that I never forgot it. Though like so many prognosticators, I also never caught the man’s name. But I heard his message, a crass and angry tome of satire and revolution, raving like a prophet coming out of the wilderness.

And now years later this man returned to me at the zenith of his life. There I was listening to another radio, far away from California and my Grandpa who had passed away a couple years past. I was still listening to NPR though. And that day, the radio told me simply and succinctly that Spalding Gray had died a sad death. I knew the name from somewhere.

Intrigued, I looked him up and found that he was a celebrated monologist and author. Finding that he was the subject of two documentary films of his monologues (Gray’s Anatomy and Swimming to Cambodia), I rented them both. To my great delight, Spalding Gray was indeed the mystery manic (his monologue on Cambodia was what I heard years ago). And yet to my great chagrin, I had discovered Spalding Gray too late. It was a morbid moment, finally to put a name to the voice etched in my mind while knowing that the voice would forever be silent.

But was it really silent? His work lives on. I look forward to reading him now, after hearing him all those years in reminisced anonymity. And of course I’ll always have NPR, a continued voice of daring human interest, promoting all the Spaldings out there that have been yet unheard.

A brush with certain death

3 Replies to “Grandpa and Spalding Gray”