I am nothing, if not occasionally obsessive.  I get fixated with certain projects, plans, or life goals 1  Well lately (as in the last 6-9 months), I’ve been rather preoccupied with finding the perfect, affordable cell phone plan.

The last time I was this worked up about hacking my status as a cell phone user, it was all about the iPhone.  This time, it isn’t the hardware, it’s the carrier.

I have this long-standing disdain for how my data gets to my head.  Whether it be of the internet variety, or the texting and talking variety, it’s all really just chunks of data.  But so that we’re all on the same page, let’s confine our terms to the industry convention:

Now the sweet spot in a smart cell phone (i.e., iPhones or any Android branded phone) plan, as I see it, would be to leverage more data heavy offerings in lieu of the more expensive voice/text services.  Why?  Well, that’s the whole point of a smart phone.  These things are internet-gobbling dynamos.  That’s arguably what they do best anyway: present the internet in amazing, fascinating, startling new ways to us consumers.  Classic voice and text are two mediums that are nearly archaic, simply because they are nearly throwaway offerings in the data world 2.

All of these reasons have led me to often call cable TV and cell phone companies merely dumb pipes.  I stand by that.  The intelligence in our data consumption has moved downstream — into our little mobile internet gizmos.  The value of the service isn’t in the pipe itself.  And knowing that their product value was losing ground, those big dumb pipes did the only thing they could to retain customers: force us.  The CEO of T-Mobile (!) summarizes it best:

“Carriers figured out a long time ago that they could make money – a lot of money – by forcing customers into restrictive, overpriced data plans.  We changed it for smartphones and we’re changing it for tablets.”

I was floored when I read this from one of the big pipes!  Speaking directly to the core problem in the cell phone market right now.  As I dug more into his company’s offerings, I was even more impressed.  But I’m getting ahead of myself.

On average, with AT&T, we are paying $135 per month for two cell phones, both iPhones.  That’s a chunk of change.  And how much service were we consuming?   Take a look:

As you can see, our usage was quite low overall.  So I began to look for alternatives.  And there are many, many options.  But it helps to realize a couple of key facts:

So contracts are bad, all agreed.  But I found that the pre-paid alternatives were harder to get right too.  And there are many:

But in the end, all of a sudden, that little T-Mobile CEO quote popped into my radar.  And I was floored.  The more I looked into it, the better it sounded.  For a 2-smartphone plan, the first line is $50 / mo.  The second is $30.  This is their baseline rate, for 500MB of 4G speed data per month.  But there is never an overage penalty.  Instead, they just throttle you down from 4G to 3G.  That’s very reasonable.  Meanwhile, text and voice are rightfully “thrown in” at unlimited.  Their coverage map is roughly equivalent to AT&T’s.

So we’ll be looking at a 40% reduction in our monthly bill!  But the switch is only on paper right now.  The SIM cards are in the mail.  I’ll post an update when they arrive.  Happy bill-slashing! 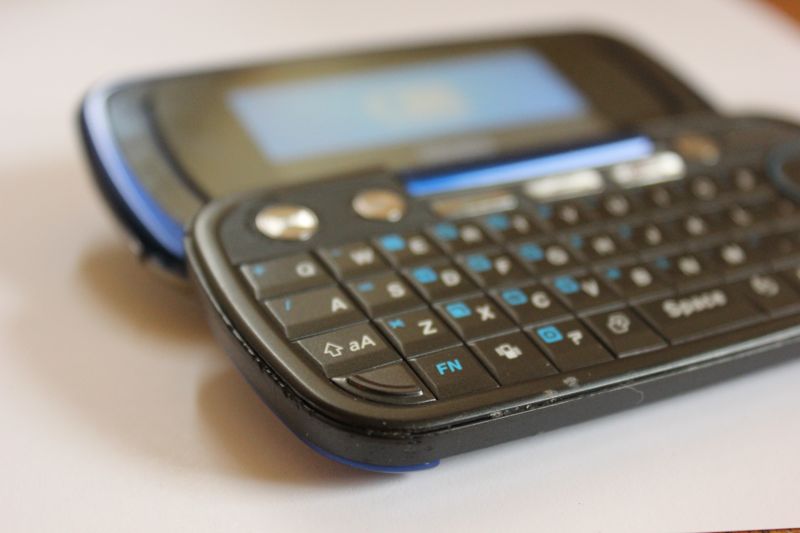 My good friend James contacted me with an electronics problem.  Seems his daughter’s cell phone was on the fritz.  So I agreed to take a look.

She has a Pantech P7000 flip phone, but it stopped charging.  I asked a few questions first to understand the nature of the problem.  For instance:

James gave me some great info, so I knew what I was in for.  My guess was that the charging connector on the phone was going bad.  I’ve seen it before.  James sent it to me to have a look: 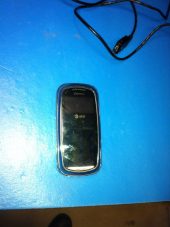 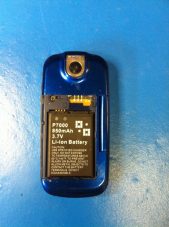 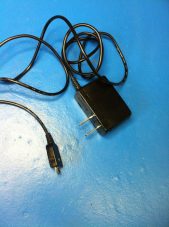 The first thing I did was have a look at the charger, just to test out the verbal info I gathered from James.  With a set of helping hands, I probed out the power and ground pins: 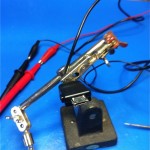 I saw a nice steady +5V, so the charger was good.  Although its plastic shell was a bit wobbly, it seemed to be functional still.  Now, onto tearing apart the phone.

I couldn’t find a tear-down guide online, so I had to figure it out for myself.  There’s one obvious screw above the battery compartment: 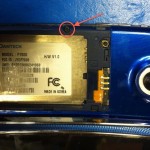 But I had a hard time finding the other hidden screws.  Turns out, there are four hiding underneath a bezel surrounding the keyboard: 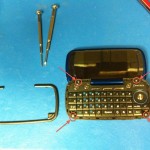 Once those are gone, the assembly comes apart rather easily: 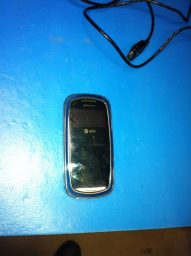 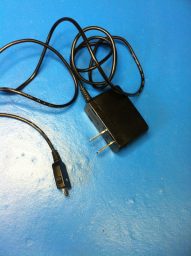 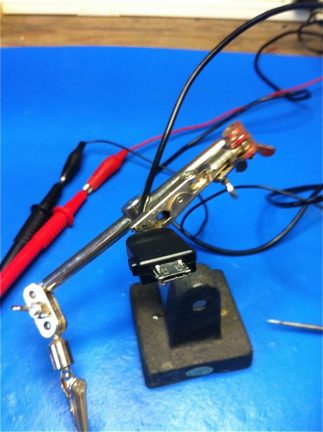 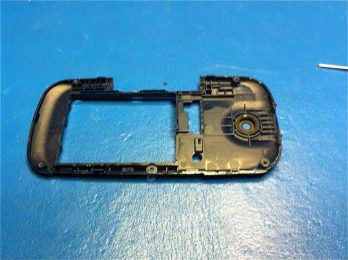 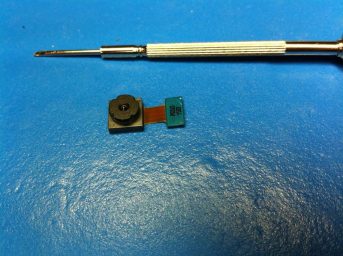 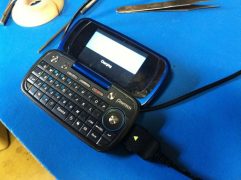 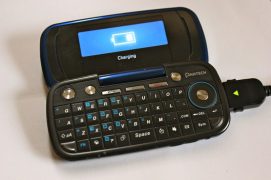 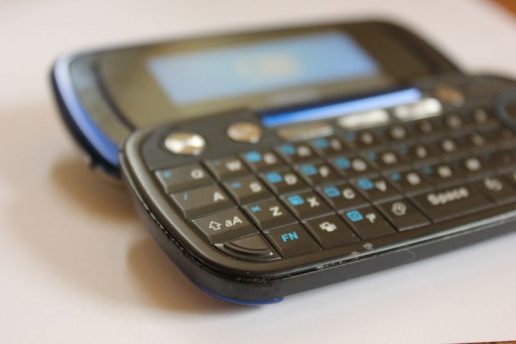 Now the back shell can be removed.  When I did, the charging connector tumbled right out.  So it was no longer even attached to the PCB: 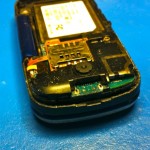 Here is a closeup of the connector: 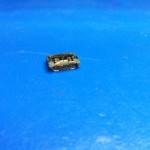 You can even make out the copper pads still attached to the pins, which have ripped off of the PCB.  That’s never a good thing!  This type of damage is actually quite common in consumer electronics.  This interface isn’t always well designed on most cheaply produced gizmos.  And yet, it’s an area that is very high-traffic; in other words, the mating cycles of the charger or serial cable to the phone is always quite high.  As a designer, I would prefer these interfaces to be more robust.  But then, I’m more interested in lifespan of my electronics, whereas most electronics companies would prefer you buy new products every 6 months.  I digress.

At this point, I wasn’t yet sure I could repair this.  There was significant damage to the PCB pads (some pads entirely gone!), so I first cleaned off the remaining pads by re-tinning 1: 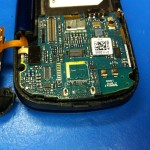 Next, I cleaned off the pins of the connector.  Then I re-placed the connector down on the board and soldered it back on.  I got maybe 80% coverage of pins to pads.  The number of pins on this connector is maybe 10-12; obviously only 2-4 of which are used for the power charger.  So all that was strictly necessary were those sets of pins.  As luck would have it, those power pins were still intact.  The phone is back to life! 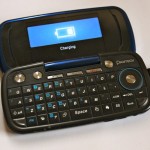 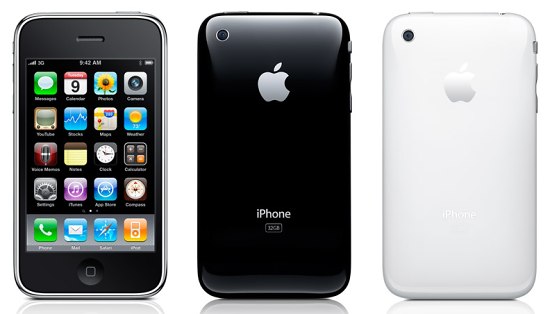