A friend recently asked me if I named my cat Ebenezer after Dickens’ miserly character, or the 18th century hymn. 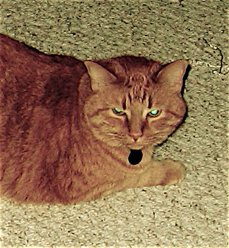 Truth be told, it was the former, as I saw good humor in the whole pet/owner similarities and a grumpy legacy seemed fitting for my cat. I hadn’t even heard of the hymn, much less that “Ebenezer” has biblical heritage.

As it turns out, Samuel prayed for protection over the Israelite army as they battled the Philistines. God answered Sam’s prayer, and in commemoration he erected a stone monument (called an “ebenezer”) to remind the people of God’s help in their desperate need.

As I look out of my bedroom into the field behind my apartment, into the quiet Colorado mid-afternoon, I’m at peace. When I look back and remember the inner turmoil that waged in my mind, a foe that was larger than I was, I’m at rest. I realize that, yes, God has helped me along thus far.

Though I haven’t always felt this way, and though the doubts and sorrows will likely return again, I know now that God doesn’t have it in for me. He’s neither the heckler nor the jackal. He’s the helper.

He really does know me intimately. He really does care about me, though I don’t always care for myself. He’s the helper when I need Him most.

It will be hard not to think of Prophet Sam and the outmatched Hebrew army when I pet my cat now. I suppose he’s my little mile marker.

Here I raise my Ebenezer, a monument to testify of God’s help.

The long happy life of a coyote survivor

10 Replies to “Here I raise my Ebenezer!”